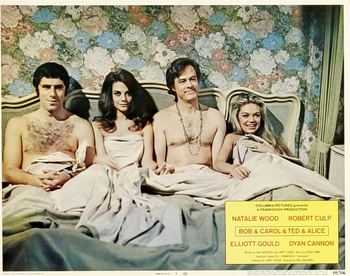 Bob and Carol Sanders (Culp and Wood) are a married upper-middle-class couple with a little too much time on their hands. After going to a group therapy retreat, Bob and Carol start to explore a new openness in their relationship. Bob confesses a one-night stand with a casual acquaintance. Carol not only isn't mad, she's turned on, and soon enough she has her own fling, which she tells Bob about.

Their close friends Ted and Alice Henderson (Gould and Cannon) are shocked and uncomfortable when Bob and Carol tell them about their new open relationship. However, after Alice has a breakthrough in therapy, she apologizes to Carol for being uptight. A joint vacation to Las Vegas then threatens to become a polyamorous weekend pairing up Ted and Carol and Alice and Bob.

Gould and Cannon earned Academy Award nominations for their performances, as did Mazursky and Larry Tucker for their original screenplay and Charles Lang for his cinematography. Quincy Jones composed the music.