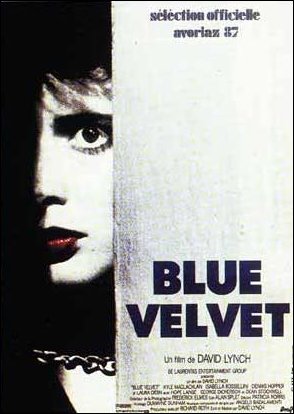 She wore blue velvet
Bluer than velvet was the night...

Sandy Williams: I don't know if you're a detective or a pervert.
Jeffrey Beaumont: Well, that's for me to know and you to find out.
Advertisement:

Blue Velvet (1986) is a neo-noir Mystery Fiction film written and directed by David Lynch, starring Lynch regulars Kyle MacLachlan, Laura Dern, Isabella Rossellini, and Dennis Hopper. The film essentially served as a comeback film for the director after the critical and box office failure of Dune (1984), and while it barely broke even commercially, its glowing critical response shone in comparison to Dune, reviving Lynch's career and earning him his second Academy Award nomination for Best Director.

Besides salvaging Lynch's career, the film is notable for launching the careers of Isabella Rossellini and Laura Dern (both being previously known for their famous parents more than anything). In times since, it has been deemed not only a Cult Classic but an exemplary work of the neo-noir genre and one of Lynch's greatest films.

The film tells the story of college student Jeffrey Beaumont (MacLachlan), who has returned to his hometown of Lumberton, North Carolina to help run the family business after his father had a crippling stroke. A couple of days after arrival, Jeffrey discovers a severed human ear in a grass field behind a neighborhood, which leads to him deciding to play amateur detective with help from Sandy Williams (Dern), a high school student and daughter of Lieutenant John Williams, a detective in the town.