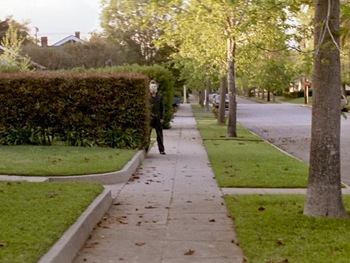 You never know what's lurking in the bushes.
Advertisement:

A peaceful town, husbands kissing their wives goodbye in the morning on the front porch of their cookie-cutter homes, children laughing and riding their bikes down the street, a cop chatting with a barista at the local cafe. Nothing bad could ever happen here. And yet, something isn't quite what it seems.

Suburban Gothic is a subgenre within American Gothic media characterized by its focus on the anxieties associated with the widescale creation of suburban communities in the post-World War II United States and the rapid lifestyle changes that took place in the financial boom of the 1950s and 1960s.

The classic Suburban Gothic setting is a seemingly idyllic neighborhood filled with picturesque nuclear families who are hiding a dark secret. These towns usually feature a maximum of one family of color, and the protagonist rarely comes from this family. Frequent themes include the presence of imposters, the dangers of groupthink, and the conflict between individuality and conformity. Works may also focus on consumerism and the ecological damage caused by suburban development.

Characteristic of this trope, like other American Gothic traditions, is that utopian ideals meet a dark reality. The pristine appearance conceals a deep rot, and neither can exist without the other. Suburban Gothic seeks to turn the American Dream upside down. An idyllic town where the neighbors are friendly and children safely roam the streets that provides a hiding place from the outside world becomes a place where the protagonist is trapped and unhappy, where the neighbors have deadly secrets, the children are hunted, and the monsters are already inside the community. For every white picket fence, there's a dark basement or a crawl space.

Children and teenagers often feature as protagonists, and antagonists are often neighbors, family members, and even other children. Characters are generally preoccupied with the average day-to-day problems of suburban life and these works sometimes have incredibly mundane subplots. The genre often, but not always, relies on supernatural or sci-fi elements typical of Gothic literature in general. The emergence of Suburban Gothic as a subgenre is partially responsible for the resurgence of the Haunted House as a setting in the mid-twentieth century.

Shirley Jackson's The Road Through the Wall, published in 1948 is often considered a foundational text in the development of the subgenre, as is Richard Matheson's I Am Legend, published in 1954. Other notable early Suburban Gothic authors include Ira Levin and Vladimir Nabokov. Today, this trope is most noticeable in horror movies, especially those of the 1970s and 1980s.

Suburban Gothic shares some history with Weird West, both drawing on the idea of the meeting place between civilization — in Suburban Gothic, the city — and the unknown — the undeveloped countryside. Interestingly, the rhetoric of suburbanization in the 1950s often paralleled the "Manifest Destiny" rhetoric of nineteenth century expansion in the American West (and turn-of-the-20th-century overseas colonial expansion into places like the Philippines, Hawaii and other Pacific islands), with those who left the cities for the unknown world of suburbia being referred to as "settlers" or "pioneers."

Often overlaps with Mundane Horror and may contain some incongruously Abandoned Areas. Compare also to Southern Gothic, another subgenre in the American Gothic tradition, and Lovecraft Country. However, unlike those tropes, Suburban Gothic is not regionally defined, and the fact that the suburbs are so interchangeable through the country arguably adds to the creepiness. Films that take place in Stepford Suburbia can be this trope, but unlike Stepford Suburbia, Suburban Gothic media does not require the town to be so perfect it's creepy.