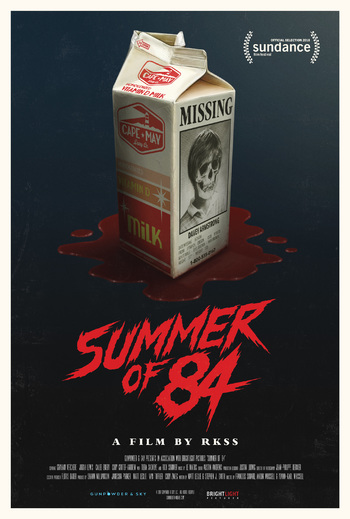 "Even serial killers lives next door to someone."
Advertisement:

Summer of 84 is a 2018 movie by François Simard, Anouk Whissell, and Yoann-Karl Whissell (credited as RKSS) and stars Graham Verchere, Judah Lewis, Caleb Emery, Cory Gruter-Andrew, Tiera Skovbye, and Rich Sommer. It was an official selection of the 2018 Sundance Film Festival.

In the summer of 1984, in the sleepy suburb of Ipswich, Oregon, near Cape May, David "Davey" Armstrong (Verchere), age fifteen, is spending his days flinging papers from his bike on his paper route, hanging out with his gang of friends - Tommy "Eats" Eaton, Dale "Woody" Woodworth, and Curtis Farraday (Lewis, Emery and Gruter-Andrew) - and pining over his crush on his former babysitter (and eighteen-year-old total babe) Nikki Kazsuba (Skovbye). At night, he plays Manhunt, a form of group hide-and-seek played in the twilight hours.

But Davey's summer takes a turn when his neighbor, Mr. Mackey (Sommer), a neighborhood cop, asks him for help moving a heavy dresser down from the upstairs into his basement, and Davey discovers a door inside locked with a padlock. Then a few nights later, during a round of Manhunt, Davey stakes out a hiding spot near Mackey's window, and sees him with a teenage boy he doesn't recognize. At first, these two pieces of information aren't of big concern to Davey, but then he overhears his dad, a cameraman for the local TV station, being told the station has received a letter from someone claiming responsibility for the deaths of over a dozen people in various towns around Cape May. Then, during a late breakfast by himself, Davey looks at the carton of milk he's pouring over his cereal, and recognizes the missing boy on it: the same boy who was with Mackey that night. Turning this over in his head, Davey comes to one fateful conclusion:

Mr. Mackey is the newly-dubbed Cape May Slayer.

Of course, Davey is smart enough to realize that no one will believe a kid with only a milk carton to back him up. If he's going to prove Mackey's a serial killer, he needs some hard evidence. To that end, he ropes up Eats, Woody and Farraday into his plan to keep close surveillence on Mackey, learning his habits, and searching for some hard evidence to take to the adults to convince them to take him seriously. But the more they watch Mackey, and the closer they get to him, the more they risk his discovery, and even if Davey's right, they might just be putting themselves in real danger...

Summer of 84 provides examples of: