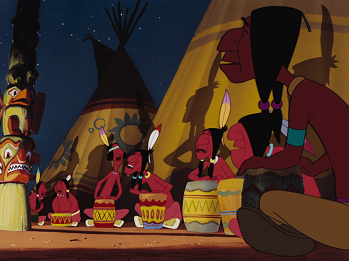 Yeah, next thing you know, they'll be singing about how they got their red skin. Wait a minute...
Advertisement:

Indigenous peoples in the Americas are a diverse group, from hunter-gatherers to massive civilizations.

In fiction, though, they're all the same: Essentially, like summer camps. Much like Culture Chop Suey and Spexico, Hollywood Geography strikes again. Note that other indigenous groups may be portrayed this exact same way, which can be considered Critical Research Failure.

The trope name comes from two particularly common tropes of this: Plains and Interior Northwest Indian tipis, and Pacific Northwest Coast totem poles. The two are socially organized quite differently; also, the Great Plains tend to be drier than The Other Rainforest.

Not only is the combination of Tipis and Totem Poles culturally incorrect, it also just plain doesn't make any sense. The whole point of tipis is that they are easy to put up and take down, useful for people who are on the move. Whereas you only put up a totem pole if you're planning on staying in one place.

A subtrope of Injun Country. Also see Braids, Beads and Buckskins, Hollywood Natives and Magical Native American, which are often found in this setting. Tonto Talk is likely to be heard. Also compare Mayincatec, which is basically this trope applied to the indigenous groups of the Americas south of the Rio Grande.