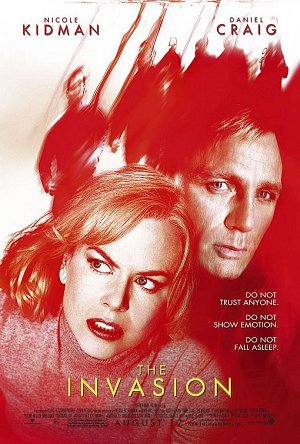 The Invasion is a 2007 American science fiction horror film directed by Oliver Hirschbiegelnote With additional scenes written by The Wachowskis and directed by James McTeigue, both uncredited and starring Nicole Kidman and Daniel Craig. It follows a Washington, D.C. psychiatrist (Kidman) who finds those around her turning into emotionless beings shortly after a major space shuttle crash.

The third remake of the sci-fi classic Invasion of the Body Snatchers (1956). Amongst many other changes, they dropped the idea of alien replacements entirely, going for a simple version of The Virus. It also worked in The War on Terror and, with it, questions regarding The Evils of Free Will. For the other remakes, go here.