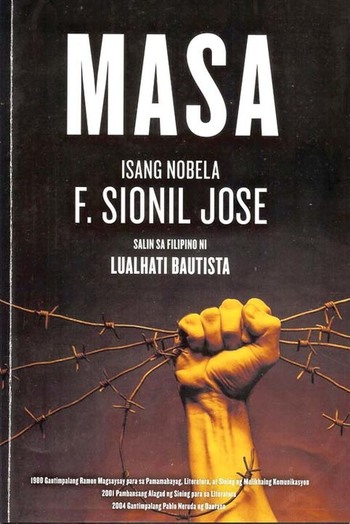 "They lied to us in their newspapers, in the books they wrote for us to memorize in school, in their honeyed speeches when they courted our votes. They lied to us because they did not want us to rise from the dungheap to confront them. We know the truth now; we have finally emptied our minds of their lies, discovered their corruption and our weaknesses as well. But this truth as perceived by us is not enough. Truth is, above all, justice. With determination then, and cunning and violence, we must destroy them, for only after doing so will we really be free.…"
— José "Pepe" Samson, Memo to Youth
Advertisement:

Mass is a 1973 novel by Filipino novelist F. Sionil José, the third in order of writing, and chronologically the fifth and last instalment, of his acclaimed Rosales Saga novels, so named for the provincial Philippine town, in Pangasinan province, where he grew up.

Sequel to The Pretenders, which covers the story of Antonio "Tony" Samson, Mass follows his bastard son, José, aka Pepe, as he lives in the Manila slums and tries to eke out a college education for himself. Pepe is not a particularly ambitious or overachieving young man, and this grates on his blood relations, who are often given to comparing him to his uncle-cum-illegitimate father Tony, who with their help managed to get into Harvard and eventually marry into the Philippine upper class. Pepe tries to do his best in school, largely to please his relatives, but much of what he really wants to do is eat, see movies, and have sex, not necessarily in that order.

Meanwhile, Philippine society in general (and Manila in particular) is spiralling into political upheaval; it is the late 1960s, the run-up to the declaration of Martial Law, and the spectre of dictatorship looms over the country. The upper classes are no help, having only become richer and more avaricious, and freely collaborating with foreign interests—especially American ones—in order to protect their own amidst the slowly boiling anger of the masses. In the middle of it all, Pepe finds himself thrust into the epicentre of this social storm, joining popular protests against the Filipino version of the Estates-General, but confronting existential crises of his own as he, too, develops feelings for an upper-class woman, even if she's also down there with him in the barricades.

Compare Dekada '70, another novel about growing up during the Martial Law regime, though this time mostly in Tagalog, covering the lives of a whole family instead of one guy, and covering the era of the actual regime itself (Mass only covers the years leading up to the declaration of Martial Law in 1972). Fun fact: Lualhati Bautista, its author, translated Mass into Filipino, as shown in the page image.