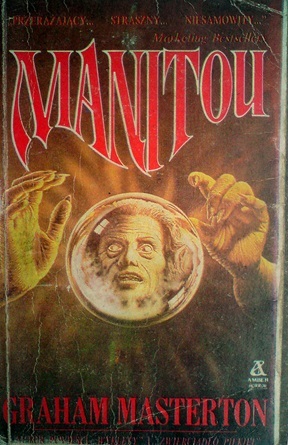 Graham Masterton's most memorable horror novel - The Manitou. The first half of the book is chillingly mysterious as the main characters are introduced, and the strange occurences surrounding the female lead and her bizarre ailment start to happen and gradually cascade faster and faster. While it may start slow, the pace of the book constantly grows until it comes to a massively chaotic and terrifying conclusion.

Masterton based this book on extensive research into Native American mythology and folklore, and also on the Cthulhu Mythos - its main antagonist originates from August Derleth and H. P. Lovecraft's 1945 novel The Lurker at the Threshold.

Written in 1975 (and published the following year), the novel was filmed in 1978 starring Tony Curtis and Susan Strasbourg.

The series includes the following works:

This book either gave un-natural birth to, or else foully nurtures and sustains, the following tropes: