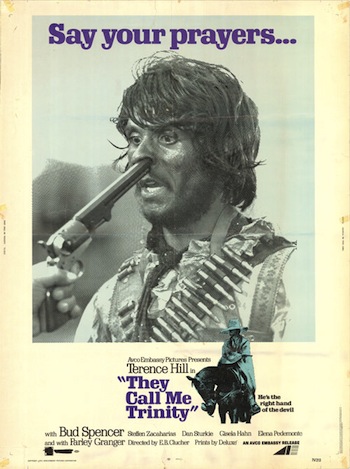 A duology of Italian Spaghetti Western movies starring Terence Hill as the eponymous Trinity and Bud Spencer as his older brother Bambino. The movies were written and directed by Enzo Barboni and quickly became a runaway success, spawning the entire genre of Western comedy in The '70s. The films also played a major role in consolidating Hill and Spencer's fame as Those Two Actors, and they went on to co-star in over a dozen more movies.

The first movie was accidentally made public domain upon its release. There are other films published under the Trinity brand but only these two are true to canon. The rest are earlier, more serious and grim films also starring Hill and Spencer but in different roles.

Alternative Title(s): They Call Me Trinity, Trinity Is Still My Name