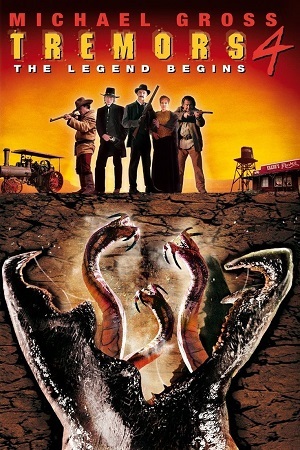 Tremors 4: The Legend Begins (2004) is the fourth movie in the Tremors film series.

The movie is a prequel set in the late 1880s and centered around a milquetoast ancestor of Burt's, as well as ancestors of Walter Chang and Miguel.

Rejection, Nevada is a small camp ("town" would be far too generous) whose silver mine, owned by one Hiram Gummer of Philadelphia, is plagued by mysterious predators. As most of the surviving miners pack up and move on, Gummer (whose dying father blew the entire family fortune in his final hours) arrives to join a few stubborn holdouts in reclaiming the mine.

They soon discover that the small "dirt dragons" are extremely lethal, and hire notorious gunfighter Black Hand Kelly to deal with them. By now, though, the dirt dragons have matured into full-size graboids.