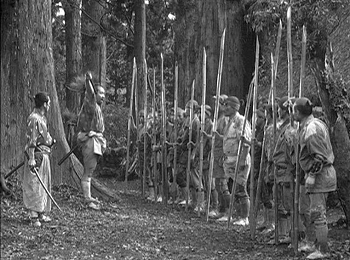 "Set aside your peaceful ways
And prepare for war
Melt down your plowshares
And take up your swords
We will see the flesh laid low
The bodies fall
The Most High that none may know
Watches us all..."
— The Sword, "Hawks and Serpents"
Advertisement:

while reading this page.

There's a big bad gang/army out there that wants to sack the peaceful village for whatever reason. The Protagonist can't stop them by himself for whatever reason. Either way, it's time to teach the initially Untrusting Community how to fight and defend themselves. Expect some complaining about "losing their peaceful way of life." If there's a Wasteland Elder around, expect them to back the hero and shush the young'un.

The villagers will fight back with pitchforks, plowshares and improvised weapons. It will also include many Bamboo Technology traps involving previously innocuous items, like laundry buckets filled with boiling water. Usually, the outlaw band/army should have been able to beat them, had they taken the villagers seriously and fought with genuine strategy; but their downfall usually lay in rushing into traps.

In some instances, the villagers may have existed under the oppression of the hordes for years or even generations without even thinking of fighting back. Not, that is, until The Hero shows up. Basking in the glow of his shining example, the common people finally rise up to combat the Evil Overlords.

With the enemy dead or on the run, and the villagers converted to the notion of violence for self-defense, the heroes leave. The young'un won't be complaining after that.

See also The Magnificent Seven Samurai, The Paragon, Perfect Pacifist People, Home Guard, Instant Militia, or Holding Out for a Hero. The village is often a Doomed Hometown that fights back. Compare Defiant Stone Throw. Contrast One-Man Army, where this sort of thing is not necessary.

The frogs of Wartwood help Sasha and Grime fend off the robots.

The frogs of Wartwood help Sasha and Grime fend off the robots.