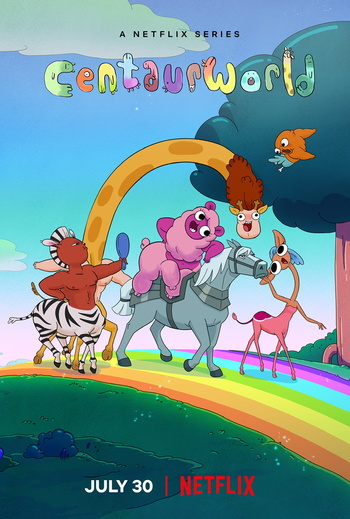 Those guys definitely aren't horsing around.note  Clockwise from top: Durpleton, Ched, Glendale, Horse, Wammawink, and Zulius.
Hey, new friend
I'm glad you made it
Hey, new friend
As long as you are with us, you are home
It really sounds like where you're from is overrated
But now that you're here, we're never going to leave you alone
(Because we have no sense of boundaries!)
— The series' establishing song
Advertisement:

The series follows the story of a hardened warhorse known only as "Horse", who grew up in a war-torn wasteland as the loyal companion of her rider (known only as "Rider"). Horse, Rider and their allies are constantly fighting off a violent army of monsters, and they go on a mission to retrieve a strange amulet that Rider says could be the key to their victory.

When attempting to reach their allies, Horse and Rider are attacked. In the scuffle, the amulet starts to glow. Horse then wakes up stranded in a vibrant and joyous land named Centaurworld which is populated by colorful, singing centaurs of every shape and size, and must find her way back to her best friend in a song-fueled voyage that will test her far more than any battle she's ever fought.

Centaurworld was released on July 30, 2021. The first episode, "Hello Rainbow Road", was released a few days early on Youtube as a preview for the series.