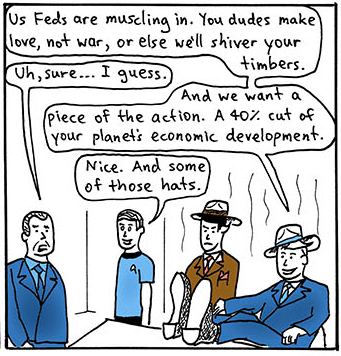 is a webcomic by David Morgan-Mar (author of Irregular Webcomic! and Darths & Droids) that recaps Star Trek: The Original Series in screening order. Unlike his other comics, these are drawn by hand. After TOS was finished, Morgan-Mar went on to do every episode of Star Trek: The Animated Series, and concluded the comic with the six films featuring the original cast, as well as Kirk's point of view during Star Trek: Generations. Morgan-Mar started recapping Star Trek: The Next Generation in 2020.

Named after the trope Planet of Hats, itself named for the tendency of several Star Trek: The Original Series episodes to display this trope, most clearly seen in the episode "A Piece of the Action". Inspired by Shaenon Garrity's Monster of the Week: The Complete Cartoon X-Files, which is likewise a 12-panel Abridged Series of a popular SF series, named after a trope.

This webcomic provides the following tropes: