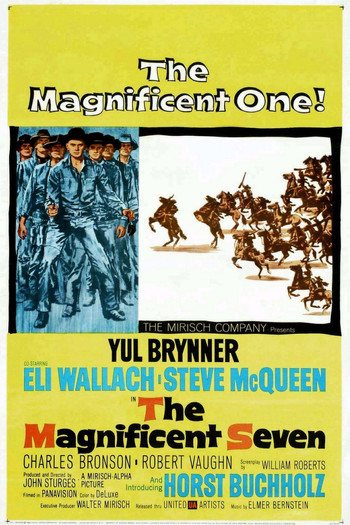 They fought like seven hundred!
Vin: I guess right about now you kinda wish you'd given your crops to Calvera, huh?
Hilario: Yes. And no. Both at the same time. Yes, when I think of what he might do. No, when I remember the feeling in my chest this morning as I saw him running away — from us. That's a feeling worth dying for. Have you ever... felt something like that?
Vin: Not for a long, long time. I, uh, I envy you.
Advertisement:

Mexican villagers plagued by a band of bandits send a few of their number to the border to buy guns so they can defend themselves. They end up hiring seven gunmen to defend the village instead.

Action-packed and boasting an unforgettable music score by Elmer Bernstein (by the way, a young John Williams played piano on Bernstein's score), The Magnificent Seven has so much testosterone that a girl risks getting pregnant just by watching it. Numerous film historians call it one of the last great "classical" Westerns (i.e., Westerns prior to the rise of the Spaghetti Western subgenre).

Return of the Seven, the first sequel, has the village from the first film be raided by marauders who carry off fifty men into the desert, one of them being Chico, who chose to return and settle down after the first film. Chico's wife goes to the other survivors of the first Band of Seven, Chris and Vin, who recruit five new members to save Chico and the other villages from a mad rancher who is using them as slave labor.

Guns of the Magnificent Seven, the second sequel, has a Mexican revolutionary (and a cousin of one of the villages from one of the previous films) seek out and hire Chris to form a third iteration of the Band of Seven to overthrow a sadistic militarist.

The Magnificent Seven Ride, the final sequel, has Chris, now married and a US Marshal, be recruited by an old friend of his turned Bounty Hunter to form a new Band of Seven to defeat the bandit lord De Toro.

The series, meanwhile, has no connection to the film quadrilogy at all.

A remake of the first film was released in September 2016, directed by Antoine Fuqua and with Denzel Washington, Chris Pratt, and Ethan Hawke heading the cast.

For the ensemble/plot trope, see The Magnificent Seven Samurai.

"The old man was right. We lost. We always lose."