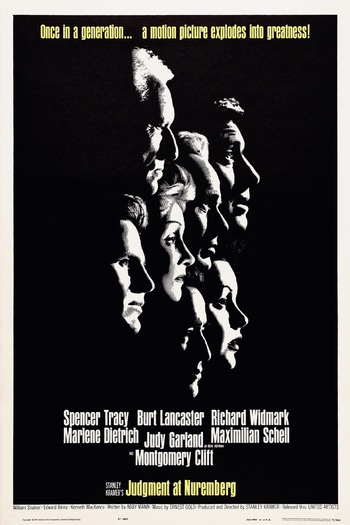 Judgment at Nuremberg is a 1961 Law Procedural film ostensibly Based on a True Story, directed by Stanley Kramer, written (originally as an episode of Playhouse 90) by Abby Mann, and featuring an All-Star Cast including Spencer Tracy, Burt Lancaster, Richard Widmark, Marlene Dietrich, Judy Garland, Maximilian Schell, and Montgomery Clift.

held by a U.S. military tribunal in the German city of Nuremberg in 1947. In this trial, sixteen defendants—all German judges and lawyers—were indicted on charges of:

In the fictional trial presented in the film, a panel of three U.S. judges, led by Chief Judge Dan Haywood (Tracy), must decide the fate of four German judges—including Ernst Janning (Lancaster)—who are merely accused of "collaborating with the Nazis". Historian Robert G. Moeller has argued

that the film's characters and story were crafted to draw the greatest possible parallel with the racially-oppressive "Jim Crow" policies of the USA itself at the time of its release (1961) by comparing and contrasting Nazi German and American policies and values; the message, of course, being that the USA's own espoused values were being betrayed by similar policies. It also notes explicitly how Nazi eugenics laws were very similar to those upheld by the US Supreme Court (and still on the books at the time).note American eugenics laws and Jim Crow were both used as models for Nazi legislation.

A pre-stardom William Shatner, still five years away from getting a gig on Star Trek, appears as an American officer who is a liaison with Judge Haywood.