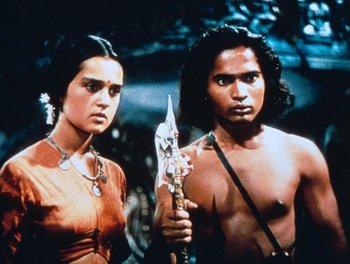 Despite its title, it's based primarily on The Second Jungle Book, as the plot is kicked off when Mowgli arrives to the Man-Village: the sub-plot about the treasure chamber guarded by a white cobra comes from "The King's Ankus", Mowgli's fight with Shere Khan is adapted from the fight with the dholes in "Red Dog", Buldeo accusing Mowgli and Messua of witchcraft comes from "Letting in the Jungle", and the crocodile character Mugger comes from a non-Mowgli story called "The Undertakers".

Sabu had also previously starred in Korda's Elephant Boy, which was based on one of the non-Mowgli stories in The Jungle Book. After the two films, Sabu and I got a tarzan-like comic book Sabu, Elephant Boy