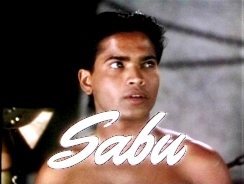 Sabu Dastagir (January 27, 1924 - December 2, 1963), usually credited only as "Sabu", was an actor from India who later gained United States citizenship. He is known for starring in a number of Hollywood movies, mostly produced by Alexander Korda, starting with The Elephant Boy in 1937. His two most iconic roles include Abu from the 1940 remake of The Thief of Bagdad and Mowgli from the 1942 Jungle Book.

Not to be confused with the wrestler of the same name.