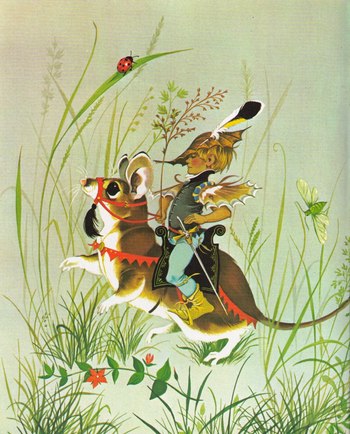 Tom Thumb is a traditional hero in English folklore who is no bigger than his father's thumb. Most commonly used as a stock Fairy Tale character in the sixteenth and seventeenth centuries.

Stories involving Tom Thumb include typical fairy tale plot lines such as killing giants, wooing various women and embarking on innumerable other tasks in order to achieve/gain/prove something. These tasks are further complicated by the size of Tom Thumb, though he inevitably manages to utilize his tiny size to overcome obstacles in his way in roundabout ways. With unsettling frequency he gets eaten by various animals and escapes by various means, including cutting his way out, yelling so that a nearby parson thinks the animal is possessed, and just getting pooped out.

The origin of Tom Thumb is often cited as a poor, childless couple in the days of King Arthur allowing an old beggar (secretly the magician Merlin) to take refreshment in their home. The couple longs for a son and would be content even if he was no bigger than a thumb. Amused by this notion, Merlin casts a spell which resulted in the birth of the diminutive Tom Thumb. The tiny child is blessed by the fairy queen.

The most notable Tom Thumb stories include Richard Johnson's The History of Tom Thumbe published in 1621. A 1730 play by English dramatist Henry Fielding by the same name name, and which he rewrote in 1731 as The Tragedy of Tragedies. A 1958 movie musical stars Russ Tamblyn as Tom. Chuck Jones did two radically different cartoons based on the story for Warner Brothers, decades apart: the Disneyesque "Tom Thumb In Trouble," and the Pythonesque "I Was a Teenage Thumb."

; there are similar tales

Tropes associated with the character of Tom Thumb: