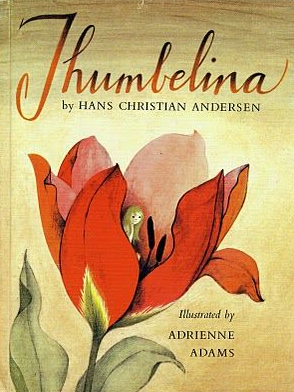 Thumbelina is a fairy tale written by Hans Christian Andersen in 1835.
Advertisement:

A woman desperately wants to raise a child, so she seeks out the help of a local witch, who gives her a grain of barley. From this seed, a tulip springs up overnight, and when the woman kisses the petals, they open to reveal a tiny girl sitting inside, no bigger than her thumb. She names the girl "Thumbelina" (Tomme-Lise in the original Danish), and raises her as her own. The girl sleeps in a walnut shell, and it is arranged for her to row in a small boat in a saucepan set on a table. During the summer, she sleeps at an open window. One night, a toad jumps in, deeming this delicate girl the perfect wife for her son, and carries her off.

Thumbelina awakens to find herself on a lily pad, and is promptly presented to her captor's son, whom she finds ugly. But the wedding is set, and the toad mother carries off her bed, leaving Thumbelina alone and upset. The fish notice her plight, and feel sorry for her. They gnaw off the stem of the lily pad, and it floats off down river, sending Thumbelina off into the wild world. She makes friends with a butterfly, and uses her apron string to tie the butterfly to the leaf, using it to steer. Then, a stag beetle spots her, becomes smitten with her, and carries her off, to present her to the other insects, who dismiss her as ugly. She is promptly dumped, and left to live alone in the forest all summer — actually having a useful life, until autumn sets in. Food gets scarce, and a field mouse finds her huddled and freezing in a corn field, and takes her in. She is allowed to live there, but has to work for her lodgings. The field mouse has a neighbour, it turns out: a mole. This mole is reckoned to be a fine gentleman, but he hates sunlight and lives far underground. The field mouse agrees with the mole that Thumbelina is to marry him. She does not like him, but seems to be stuck with him.

In the tunnels between the caves of the Mole and the mouse lodgings, Thumbelina finds a swallow nearly frozen to death. She tends to it, and it survives, to come out in the spring, while Thumbelina is to prepare for her wedding. At the end of summer, this is meant to happen, but Thumbelina walks out one last time to greet the departing birds. The swallow shows up, and Thumbelina begs to be carried away — which the swallow does, leaving the Mole behind. The swallow carries Thumbelina to a southern land, where she is dropped off in a meadow full of flowers, and in each of the flowers resides a small fairy, being of her own size. The fairy prince woos her, and this time Thumbelina gives in, to be his princess. She is granted a pair of fairy wings (actually from a fly), to spin around with the others. The fairy prince also gives her a new name: Maya, which sounds a lot better than "thumbelina". The swallow grieves because he also has grown to love her, but is also content that she finally is happy. At last, the Swallow returns to Denmark, where he has a nest close to the window of an author, and from this swallow, states the author, "we have the entire story"...