Literature / The Fisherman and His Wife 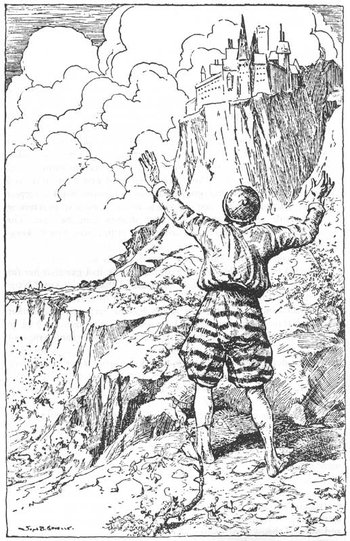 "Flounder, flounder, in the sea, come, I pray thee, here to me."
Advertisement:

The Fisherman and His Wife is a fairy tale recorded by the Brothers Grimm. It is notably one of their few stories to have a Christian theme, given the tale's ending.

A kindly but poverty-stricken fisherman catches a magical fish. The fish begs him to let it go, claiming to be a prince. The fisherman lets it go and tells his wife all about it. The fisherman's wife is overbearing and greedy and she demands that he go back and ask the fish to grant him a wish out of gratitude. The fisherman does not have any desires, so the wife tells him to make the fish give them a nicer house, which is what she wants.

The fisherman's wife can not be satisfied. After gaining her castle, she demands wealth and political power. The poor fisherman is sent to ask for everything she wants. Each time, the sea becomes more turbulent and stormy. It gets to the point where the fisherman risks his very life to have his wife's wishes granted. When the wife demands to have power over the Sun, Moon and stars, (and be more powerful than God) the fish refuses to grant this wish and undoes all the other wishes. The fisherman then goes home to his now humbled wife in their meagre hovel.

It is perhaps one of their more well-known stories, and has its own number in the Aarne-Thompson folktale classification system.

In the original Grimm collection, this tale is in Low German (Plattdeutsch); it was written by the painter Philipp Otto Runge (1777-1810). For another Low German fairy tale by Runge, see "The Juniper Tree".

The Fisherman and His Wife provides examples of the following tropes: