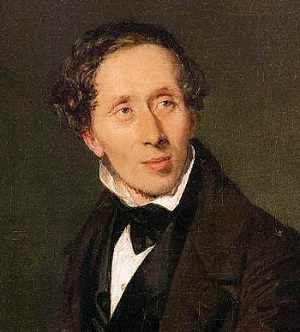 Remember that bedtime story about the ugly duckling who became a swan? The image of a princess sleeping on a ton of mattresses...and a pea? The Fairy Tale about a mermaid who sold her voice to a sorceress to try to win the love of a human prince? Meet the Danish author of all the saddest and sweetest of the fairy tales we all grew up with, tales seen referenced in pop culture so frequently that many people have no idea they were written by the same author.

Born on April 2, 1805 (which is now "National Children's Book Day"), Hans Christian Andersen (abbreviated H. C. Andersen in Denmark) grew up to become to fairy tales what Shakespeare became to drama. His works range from the simple to the epic, are full of complex but meaningful symbolism, and span the Sliding Scale of Idealism Versus Cynicism.

The most familiar version of "The Little Mermaid" in the Western world is probably Disney's, which deviates strongly from the original: Hans Christian's protagonist has No Name Given, no bikini top made from seashells, and no Non Human Sidekicks, but does have a grandmother, and wants to marry the prince for "an immortal soul" (yes, in the Christian sense) as much as for romantic love. Not to mention the minor fact that said prince marries another girl, meaning she'll die unless she stabs him, which she doesn't. And then there's a bit of disconnected Deus ex Machina Aesoptinum Mood Whiplash, but we don't talk about that.

Interestingly, Oscar Wilde still thought the story too upbeat and penned an even darker version, "The Fisherman and His Soul" as a reaction. In this charming tale, a human must sell his immortal soul in order to marry a mermaid.

Other works have come through the adaptation process about as reasonably intact as can be expected. "The Snow Queen", basically an epic Gender Flipped Rescue Romance heavy on the symbolism, has been turned into a science-fiction novel, an animated movie, and an anime by NHK, Cardcaptor Sakura's network. The Disney film Frozen (2013) was originally meant to be an adaptation of "The Snow Queen", and even had it as its Working Title (and it's still titled that in some countries), but ended up developing into its own original story with very, very loose inspiration from the fairy tale (basically just the ice palace).

The Other Wiki says he was also bisexual, so that's fun too. It's also noted that Andersen himself, his eccentric behavior and arrogance usually led to him getting kicked out by the various nobles who housed him.

He passed away in August 1875, and never married or had children.

Works by Hans Christian Andersen with their own pages include:

Andersen's other works provide examples of:

Andersen has appeared as a Historical Domain Character in the following works: