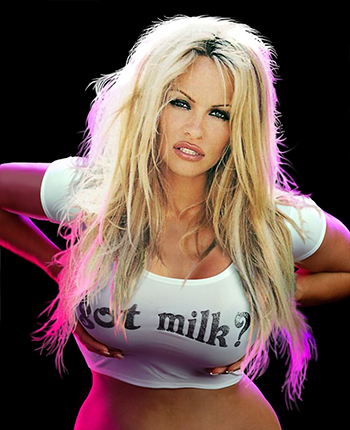 "People always tell me, 'Reinvent yourself, re-this, re-whatever.' I haven't reinvented myself. It's an honest evolution. I've always been authentic."
Advertisement:

Pamela Denise Anderson (born July 1, 1967) is a Canadian-American actor, model, producer, author, activist and former showgirl, known for her roles on the television series Home Improvement, Baywatch, V.I.P., and Stacked. She was chosen as a Playmate of the Month for Playboy magazine in February 1990 and has posed for the magazine multiple times since (she has also appeared on the cover of Playboy more than any other woman). For a time, she was known as Pamela Anderson Lee (or Pamela Lee) after marrying Mötley Crüe drummer Tommy Lee. She also did the voice over work for the titular character in Stripperella, an animated series by Stan Lee, which also used her likeness.

She is considered by many to be one of the biggest sex symbols of the 1990s. Since Anderson's nakedness has appeared in Playboy the most times (14 covers and 15 spreads), they asked her to be on the cover of their final 2015 nude issue (apparently too many people do read it for the articles). Not bad going for a 48-year-old Canadian rose.

She's always been very active politically. Her character in Baywatch was a flower power type girl. In fact half the Baywatch cast were vegans and adamant animal rights activists. (She actually had some P.R. issues to repair after single-handedly making Uggs a thing, as Uggs are animal cruel.) She also called out the PM of Australia being "lewd" on commercial radio, in what was an entirely unforced error on his part.

Some of her films:

Some of her television shows:

Example of:
Spit Out a Shoe