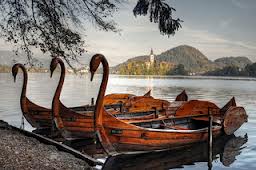 Swans, especially the European mute swan (Cygnus olor) have appeared in literature and mythology for centuries. These birds are usually depicted as beautiful and graceful. They are also frequently used as a symbol of love (due to their tendency to mate for life in most cases) and, since usually white, innocence and purity. Black swans, native to Australia, are also popular, though more often associated with evil (though usually elegant evil) due to the prevalence of Good Colors, Evil Colors.

An easy way to associate these characteristics with a character or civilization is to create their canoes, paddleboats, or even larger vessels in the shape of swans. Smaller craft can be drawn by swans, or if the birds are large enough, they can even be the boat. These boats are usually associated with leisure, such as gliding around a pond (whether or not on an Old-Fashioned Rowboat Date), rather than utilitarian transport. As a further evolution of this idea, swan-shaped carriages can now be seen on roller coasters, carousels and other amusement park rides. Swanboats are often found in a Tunnel of Love.

May overlap with Horse of a Different Color in the case of riding swans, or Chariot Pulled by Cats in the case of harnessing swans to the boat or the chariot.

The roots of this trope are Older Than Feudalism, as many gods and goddesses from classical mythology are depicted as associated with or riding swans.

The trope can be used to show Subverted Innocence if the society or culture involved is actually a Town with a Dark Secret, or part of a Crapsaccharine World. Occasionally parodied by having the boat be a large yellow rubber duck instead of a swan.