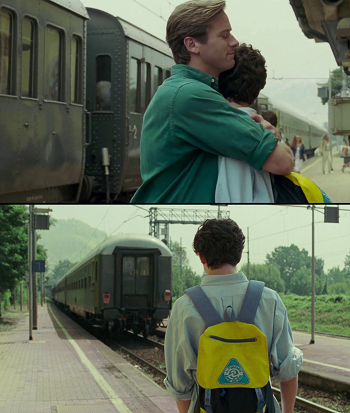 "The day's last one-way ticket train pulls in
We smile for the casual closure capturing
There goes the downpour
Here goes my fare thee well"
— The Fray, "Vienna"
Advertisement:

The classic parting of two lovers at the train station.

The two Star-Crossed Lovers are saying goodbye: who knows if they will ever see each other again. Expect a conductor on the platform shouting "Board!", forcing them apart. As the train starts to pull out of the station, the lover staying behind runs alongside to keep his lover in view as long as possible, while the lover on the train either leans out the window or is pressed up against the glass.

A very effective Tear Jerker. Can be a Downer Ending, but occasionally the lovers are reunited through The Power of Love.

See also Airplane of Love. In a modern North American context, this is an Undead Trope, as railroads have decayed in favor of short-hop plane flights and the automobile. It's more common in media from Japan and Europe, where trains remain a vital mode of transportation. In a story with a more supernatural edge, one may be seeing the other off at the Afterlife Express.

If the lover who's staying is trying to get to the station before the train pulls out, it overlaps with Race for Your Love.