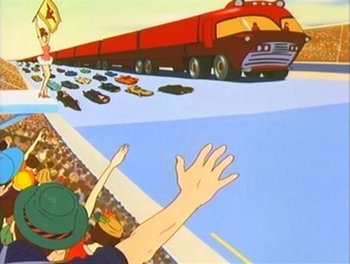 This trope is for when a ship in the story is hugely (and in some cases, comically) oversized for the crew or purpose it currently has. The large size may have had an original use, but in the story it's being vastly underutilized. Though mainly a sci-fi trope usually involving spaceships, it can apply in other situations as well (i.e. boats, hovercrafts, etc.).

What happens when Bigger Is Better is applied to ISO Standard Human Spaceship. May overlap with Starship Luxurious. May involve an Enormous Engine. For things that are larger and have even less use, see Big Dumb Object. Compare Unnecessarily Large Interior, Mile-Long Ship, Planet Spaceship and Awesome, but Impractical.