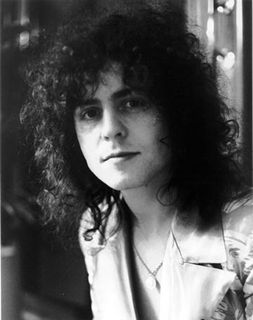 "Well it's plain to see
You were meant for me
Yeah, I'm your toy
Your 20th Century boy"
T. Rex, "20th Century Boy"
Advertisement:

Marc Bolan, born Mark Feld (30 September 1947 – 16 September 1977) was a British singer-songwriter, guitarist, and poet. and one of the leading pioneers of Glam Rock. Bolan was mostly known for his band T.Rex.

As usual, you can find the basics about his life and career at The Other Wiki

As part of Tyrannosaurus Rex/T. Rex:

"Well you're slim and you're weak you've got the tropes of a Hydra upon you...":