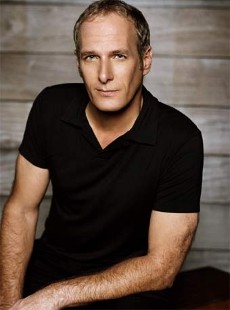 Now back to the good part!
Advertisement:

Michael Bolotin (born February 26, 1953), better known known as Michael Bolton, is a no-talent ass-clown...I MEAN...a phenomenon of The '90s. There is no other American singer and songwriter quite like him.

Let's explain. There are many metal bands out there which, despite having what fans would consider decent metal, are known solely for their power ballads by the general public. Michael Bolton got his start as the singer and occasional guitarist in a mostly-forgotten metal group called Blackjack, which explains the quality of his voice. However, for his entire solo career, which is most of his known career, Michael Bolton has done nothing but power ballads, with some mid-tempo songs thrown in. What is more, they are almost all Silly Love Songs or Obsession Songs (those types often overlap in the popular consciousness).

He did chart well during his peak, and he was more than a One-Hit Wonder. He had several top ten albums, including two number ones, at least one live DVD concert, and a Grammy award.

Younger audiences will know him for singing "Go The Distance" from the 1997 Disney film Hercules, a song pretty much required by law to be played at every high school graduation. He is also known these days for being found guilty of plagiarizing "Love Is a Wonderful Thing" by the Isley Brothers. (Note: if you are writing your own songs, never let your music stray too close to anything published by Motown.)

He also made a cameo and is a minor plot point in the infamous Cuba Gooding Jr.. film Snow Dogs. A little known fact is he helped write the song "Forever" for Kiss.

His career took a very interesting turn, to say the least, when The Lonely Island featured him in one of their videos

. While he was hesitant to do a particularly filthy comedy song at first, "Jack Sparrow" proved to be a massive viral hit. It gave Bolton a semi-ironic new generation of fans, which he embraced with a 2017 Netflix special, Michael Bolton's Big, Sexy Valentine's Day Special.

Now back to the good tropes:

Example of:
No OSHA Compliance