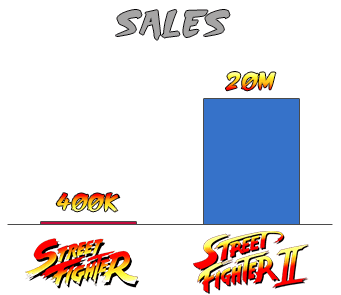 Basically when a series is rolling along, and doing decent, if a bit obscure. Then one installment is released, and that installment takes over the series. Occasionally, a fan might go back and look at the obscure earlier entries, but within the general fanbase, this entry is the series from the moment of its release.

Often caused by a Surprisingly Improved Sequel, and related to Adaptation Displacement, More Popular Spin-Off, and Older Than They Think. The aforementioned hardcore fans sometimes declare that It's Popular, Now It Sucks!. Usually happens with video games, but can apply to series in other media.

This does not count series which simply avert First Installment Wins by having a non-iconic first installment that was never displaced from popular consciousness.

Exceptionally likely in video games when an old series, beloved by those who remember it but well vanished from the public consciousness, gets a new installment. See Metal Gear Solid and Street Fighter II.

Contrast It's Popular, Now It Sucks!. The exact opposite of this is First Installment Wins.

Obligatory Tropes Are Tools note: please don't call people stupid for finding out late and starting with a sequel in the middle of the series, therefore not knowing the previous ones, especially if there are no numbers in the title. If they refuse to acknowledge what came before, then you have a case of Fan Dumb. Starting with a sequel might lead to Early Installment Weirdness.