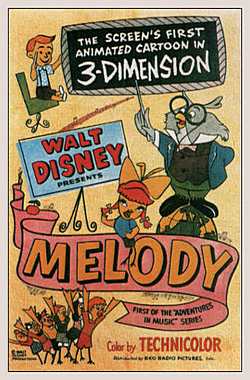 That's where the music comes from!
Advertisement:

Two interesting short subjects made during the late years of The Golden Age of Animation (or the beginning years of The Dark Age of Animation, depending on one's point of view), the Adventures In Music duology — Melody and Toot Whistle Plunk and Boom — are two popular 1953 shorts in the Classic Disney Shorts lineup. While they feature none of the standard Disney cast, they are noteworthy for three reasons:

Both shorts are well remembered for their catchy music and their striking layout and character design. However, Walt Disney himself disliked the animation of the shorts. Allegedly, they were both made by Ward Kimball while Disney himself was off in Europe. After Disney won an Oscar for Toot Whistle Plunk and Boom, he went up to Kimball and told him, "No more of this UPA crap." (Note that Walt was suspicious of artsy people like the UPA, many of whose artists had been involved in a 1941 strike at his studio.)

Both shorts are included on the Fantasia 2000 DVD, as well as the Walt Disney Treasures: Disney Rarities DVD set. And of course, they had a second life providing shell material for the long-running Disney Sing-Along Songs videos.