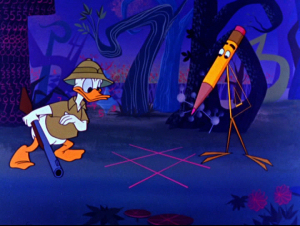 "What kind of a crazy place is this?"
Donald in Mathmagic Land is a 1959 animated cartoon short by the Walt Disney Studios, starring Donald Duck. It initially premiered paired with the feature film Darby O'Gill And The Little People. The film was made available to schools and became one of the most popular educational films ever made by Disney.
Advertisement:

The story follows Donald as he discovers the realm of Mathematics.