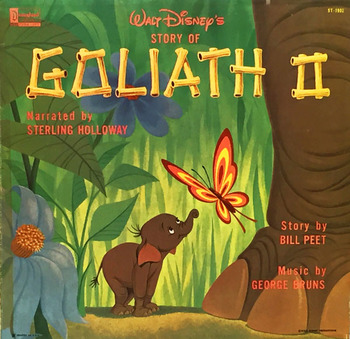 Goliath II is an 1960 animated short from Disney, the result of an idea by Bill Peet. It tells the story of a very small and curious elephant child trying to survive the jungle and get the approval of his pompous father. That is not easy for someone as tiny as his father's toenail.

The short is notable for using a gratuitous amount of recycled animation, and is the first Disney film to make extensive use of the xerography process of transferring animation drawings to cels, which would later be put to use in Disney's feature 101 Dalmatians. It was nominated for the Academy Award for Best Animated Short Film, losing to Gene Deitch's Munro.