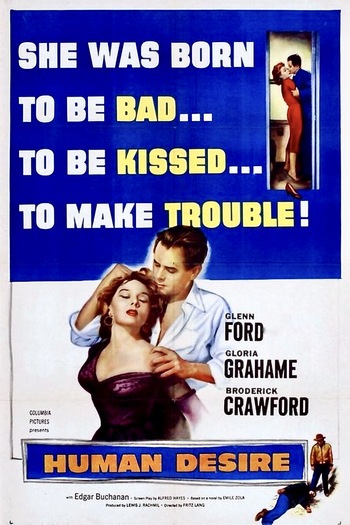 Human Desire is a 1954 Film Noir drama directed by Fritz Lang, starring Glenn Ford, Gloria Grahame and Broderick Crawford. It is based on Émile Zola's novel, La Bête humaine, which had already been adapted by Jean Renoir in 1938 (La Bête Humaine).

Jeff Warren (Ford) fought in The Korean War. He is back home and he resumes his work as a train engineer. His friend and colleague Alec Simmons (Edgar Buchanan) often puts him up, while Alec's daughter Ellen (Kathleen Case) has a crush on Jeff. Meanwhile, Buckley (Crawford), another employee of the train company, is fired. To get his job back, he persuades his wife Vicki (Grahame) to meet Owens (Grandon Rhodes), an old acquaintance of hers and a big customer of the company, who could pressure Buckley's boss into hiring him back.