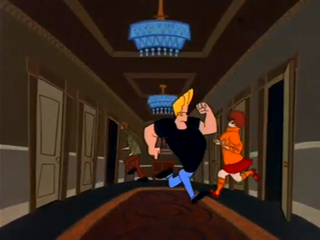 The trope namers (and a guest) off to the races.
"SCP-K9-J-2 is a hallway within SCP-K9-J that has a non-euclidean geometry. When rock or pop music is played and SCP-K9-J-1 pursues (a) subject(s) into SCP-K9-J-2, any doorway entered into in SCP-K9-J-2 will lead out another doorway within SCP-K9-J-2. Subject(s) may find themselves running alone, with each other, or with SCP-K9-J-1. This effect persists until any or all parties trip or attack one another."
— SCP Foundation, "SCP-K9-J-EX"

A very standardized visual comedy sequence. A static shot down a hallway lined with doors, like a hotel or mansion corridor, comes up in the middle of the chase scene. The chaser and one or more groups of chasees enter a door. Then they emerge from a different door. Or opposite doors.

There are a few different gags used for the climax:

A Running Gag, literally and figuratively, this one is unique for one reason; every instance of the trope subverts itself by the time the scene is over. Thus, this trope was discredited as soon as it was created, yet still good for a laugh.

Usually animated, but can be done in live-action by locking off the camera at the end of the hallway to hide edits and allow room switches. In animation, allows tremendous savings on budget, since the same cross-frame run-cycle cels can be used over and over and over for the entire sequence.

Related to One of These Doors Is Not Like the Other, a trope in video games that often has characters repeating a single screen just like this, and Fighting Across Time and Space, a different sort of teleportation-based chase scene.

This trope is Older Than Television, dating to the old days of French Farce. It showed up on film in the 1930's. Even with animation, it predates its Trope Namer by some thirty years. In live theater, certain kinds of screwball comedies are known as "door slammers" for a climactic scene or scenes where the whole cast is chasing one another, in one door and out another, everyone just missing everyone else by an instant; notable examples include A Funny Thing Happened on the Way to the Forum and Lend Me a Tenor.

Also called a "Freleng Door Gag", after Warner Bros. director Friz Freleng, who may not have created it but took it to a whole other level.

Perhaps the first traditional/typical use of this gag in the franchise, when Don Knotts chases the gang dressed as a ghost.

Perhaps the first traditional/typical use of this gag in the franchise, when Don Knotts chases the gang dressed as a ghost.