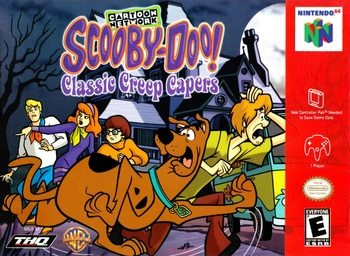 Scooby-Doo! Classic Creep Capers is a 2000 video game released on the Nintendo 64 and Game Boy Color, based on the long-running Scooby-Doo franchise.

The N64 version is a non-violent Resident Evil clone (even using the same engine as Resident Evil 2), with the same Tank Controls (though only in the second controller configuration), pre-rendered backgrounds, and fixed camera angles. Unlike the Resident Evil games, the player is able to save wherever and whenever they want, provided they have a Controller Pak.

The player controls Shaggy through four levels, the first three of which are adaptations of episodes from Scooby-Doo, Where Are You!. The basic formula is the same in all four levels: Explore the area for clues and trap pieces and bring them to the rest of the gang, while avoiding the Monster of the Week and other obstacles. Once all of the clues and trap pieces are collected, Shaggy will have to track down the monster and lure them to a specific area to trap and unmask them.

Instead of having a health system, the game makes use of a "Courage" system. When Shaggy comes into contact with something scary, he loses some courage. If he loses all of his courage, he will panic and run away. Courage can be replenished by eating Scooby Snacks scattered throughout the level, or by visiting kitchens (which are only found in the first three levels).

The Game Boy Color version, on the other hand, is a point-and-click adventure game based on a single episode, "Nowhere to Hyde". Playing similarly to Maniac Mansion, you can swap between the members of the gang as they explore Dr. Jekyll's mansion, trying to uncover the truth behind a series of robberies committed by the supposed ghost of Mr. Hyde.

Tropes in the N64 version:

Tropes in the GBC version: