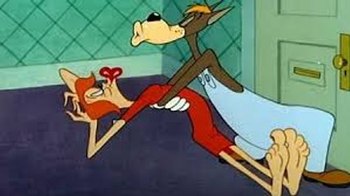 It is a follow-up to his 1943 cartoon short "Red Hot Riding Hood" (and reuses some bits from "Swing Shift Cinderella"). That one featured Red Riding Hood as a nightclub singer in the big city; this one makes Red Riding Hood a hillbilly living in the country. At the start of the cartoon "Country Red" is delivering a jug of moonshine to her grandmother. She is intercepted by "Country Wolf", but he doesn't want to eat her, he just wants to kiss her. And as the image shows, she’s just fine with that!