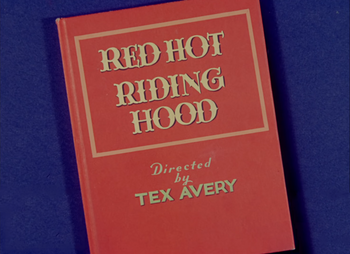 "Something New Has Been Added"
— The second title card
Advertisement:

"Red Hot Riding Hood" is an animated cartoon short subject, directed by Tex Avery and released on May 8, 1943 by Metro-Goldwyn-Mayer. It is one of Avery's most popular cartoons, inspiring several of his own "sequel" shorts (which really were just shorts with a similar plot and the same characters, though notably Droopy was involved with many of the other shorts Wolfie and Red appear in) as well as influencing other cartoons and feature films for years afterward.

The story begins as a typical cutesy retelling of "Little Red Riding Hood"—that is, until the Big Bad Wolf and even Red and her Grandma become annoyed at the narrator and complain about how stale and overused the premise is, demanding a new take on the story. The narrator finally gives in to their demands—cue the second title card quoted above.

The cartoon then takes us to Hollywood, where the Big Bad Wolf is now a womanizer who frequents nightclubs, Red is now an incredibly attractive singer and dancer, and her Granny is a hotel/implied brothel owner and an (apparently) oversexed Abhorrent Admirer of Wolfie once she sees him. Hilarity does indeed ensue from there.

The follow-up shorts to "Red Hot Riding Hood" were as follows:

An Indian Maiden Expy of Red also makes a cameo at the end of the Tex Avery short "Big Heel-Watha" (1944). Red is a prominent character in some Tom and Jerry direct-to-video films (where she acts as Parent Service) while Wolfie and the two wolves from "Little Rural Riding Hood" make cameos. List: