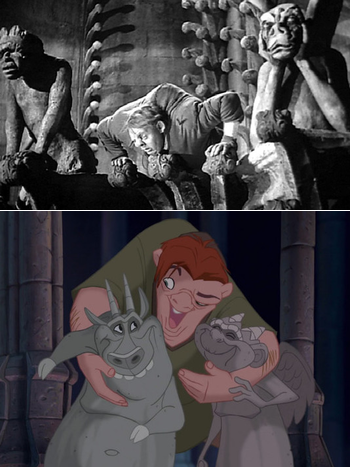 There is also singing, per the norm.note Despite this, Hunchback is still one of the darker Disney films.
"It was much earlier even than that when most people forgot that the very oldest stories are, sooner or later, about blood. Later on they took the blood out to make the stories more acceptable to children, or at least to the people who had to read them to children rather than children themselves (who, on the whole, are quite keen on blood provided it's being shed by the deserving* That is to say, those who deserve to shed blood. Or possibly not. You never quite know with some kids.), and then wondered where the stories went."
— Hogfather

A form of editing a story that renders a story "safe" for juvenile audiences (or the parents thereof) by removing undesirable plot elements or unpleasant historical facts, adding Broadway-style production numbers, and reworking whatever else is necessary for a Lighter and Softer Happily Ever After Ending. There is often a clearer line between good and evil, which may cause one character to be forced into the cackling villain role. Talking Animal sidekicks tend to be tacked on somehow.

This isn't always a bad thing, though. Done properly (i.e. not too cute or dumbed-down), the Disneyfied property can be just as entertaining as the original or even better (for example, if you're not a fan of Downer Endings, or if they've improved boring parts and given the characters personality, or fixed a Plot Hole). The actual tales themselves are often too short to adapt properly, and the expanded versions can be hit and misses. The reworked Disney versions lead to Adaptation Displacement and Sadly Mythtaken, with most people being unaware that the original fairy tales might have even contained grimmer aspects. Visual representations of the fairy tales are often strongly influenced by Disney —Snow White is seen wearing a dress with primary colors and a red bow in her hair, The Little Mermaid with red hair, a green tail, and a purple seashell bra, and so on.

Named for its most notorious practitioner, Disney studios, although it actually started before the Victorian Era. Ironically, the Trope Maker would be The Brothers Grimm, who despite being the Trope Namer for Grimmification, actually were the first ones to make fairy tales more suitable for children. The violence and sex were actually toned down tremendously from the originals.

A Sub-Trope of Bowdlerise. Compare Abridged for Children, when this happens to the original work. See also Sadly Mythtaken (often caused by this). Contrast Grimmification. Not to be confused with Disneyesque, which is emulating the stereotypical visual style of Disney animated movies, but not necessarily emulating the tone.

Anime and Manga
Comic Books
Fan Works
Meeting up with Rhett, the pair sings a duet or so before wondering what to do. Rhett is still blockade running slaves, and offers to smuggle Scarlett out along with Big Sam, so that they can both settle down in peace. Scarlett, after three animated moments of agonising soul searching, decides to refuse. Her place is with her people, she tells him. The Yankees have reached Atlanta, and though the South's defeat seems imminent, Scarlett cannot betray her side, faulty and racist though they may appear to be even after all of Disney's modifications.
Films — Animated
Films — Live-Action
Literature
Live-Action TV
Radio
Theatre
Video Games
Web Comics
Web Original
Western Animation
Feedback

Brian and Stewie travel to a universe where everything is drawn by Disney.

Brian and Stewie travel to a universe where everything is drawn by Disney.