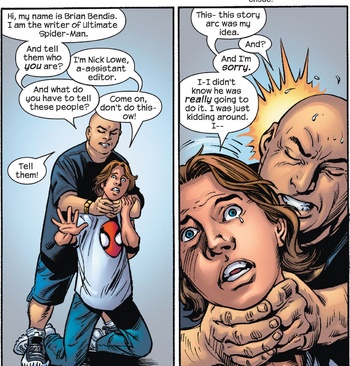 And now you know the way comic books are done.
"Anyone who can’t make money off of Sports Night should get out of the money-making business."
— New Network Owner, Sports Night series finale (discussing the Show Within a Show and definitely not the series itself)
Advertisement:

Writers and directors get a lot of demands made of them. Not only is there Executive Meddling but once a show develops an audience, the fans will probably have their own ideas of what they want to see.

And sometimes the writer gets sick of it.

Writer Revolt happens when the writer gets sick of the demands being made of them and subverts them. They might start their attack by torpedoing ships. But go too far and fans will stop supporting a show that attacks them, and that's the end of the writers' jobs. And sometimes this is what they wanted all along.

Not to be confused with show writers actually going on strike. Compare Biting-the-Hand Humor, Take That, Audience!, Artist Disillusionment, and Wag the Director. May lead to Why Fandom Can't Have Nice Things.