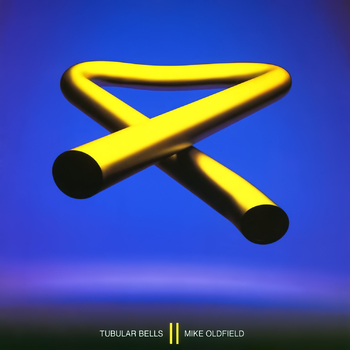 Tubular Bells II, released in 1992, is the fifteenth studio album by English Progressive Rock multi-instrumentalist Mike Oldfield. His first album on WEA Records in the UK and Reprise Records in the US, onto whom he signed after fulfilling his contract with Virgin Records in 1991, the album acts as perhaps an even bigger "fuck you" to Virgin than his last two albums on that label ever hoped to achieve. Specifically, the album gives WEA something that Virgin had constantly demanded but never received: a sequel to Tubular Bells, Oldfield's 1973 debut megahit.

A fairly self-aware project, the album riffs on the tendency for sequel albums to be retreads of their predecessors by... being a retread of its predecessor, but with added electronic experimentation in line with the change in direction Oldfield was undertaking in the 1990's. The end result is an album that sounds both attached to and detached from the first Tubular Bells, repeating enough of the same beats while still having enough unique elements to stand out on its own apart from having "Tubular Bells" in the title.

For this album, Oldfield enlisted not only Tom Newman, co-producer of the original Tubular Bells, as producer, but also Trevor Horn, the latter of whom had achieved major success producing a variety of artists throughout the 1980's (including, but not limited to, Yes, Grace Jones, ABC, Frankie Goes to Hollywood, and his own group Art of Noise). Consequently, the album has a strong tone of "old meets new," combining the orchestral-inspired prog composition and instrumentation of Tubular Bells with advancements in production technology and emerging trends in musical techniques among artsier, more experimental acts, including many of the New Age artists that Oldfield had been lumped in with throughout his career.

The resulting album was a considerable commercial success for Oldfield, topping the charts in the UK and Spain and being certified quintuple-platinum in Spain, double-platinum in the UK, and gold in Germany. Oldfield would later release a Tubular Bells III six years after this album, thus turning Tubular Bells into a prominent sub-series in Oldfield's wide back-catalog.

Tubular Bells II was supported by three singles: "Sentinel", "Tattoo", and "The Bell".

Who's gonna trope your virgil?