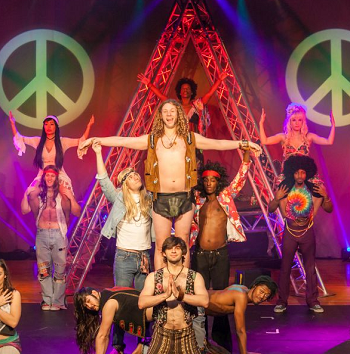 'New Age' defines a constellation of beliefs derived from Eastern Mysticism (particularly Hinduism and Buddhism), Victorian Spiritualism and psychic research. It experienced a revival beginning in the late '60s and '70s and became extremely stylish in The '80s. Expect lots of crystal power, psychic dolphins, Atlantis, pyramids, good vibes, reincarnation, quantum consciousness and, above all, the Age of Aquarius, the funkiest, highest-vibration-in-the-spectrum Age of them all!
Advertisement:

Enemy of all that is bogus, mechanoid or square, friend to the chilled-out and open minded.

Also the name for a kind of music. Very calm, peaceful, and deep, man. It often features a mix of electronic Ambient with World Music instruments and occasional vocals, singing something illegible in Dog Latin, Polynesian or Lakotah. "New Age Music" is more of a marketing term than any real connection to beliefs, however. Most "new age" artists just play what music they like, and some are even angry about the term.