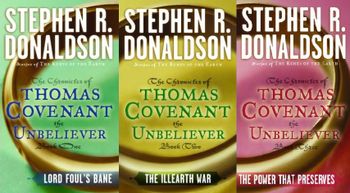 This is where cover art is basically the same motif repeated over and over with slight variations within a franchise. Collectors probably love this stuff. Until the scheme is switched midway through publishing a series, anyway.

One popular variation is to have the covers of all the installments of a work form a larger picture when they're placed side by side in the correct order.