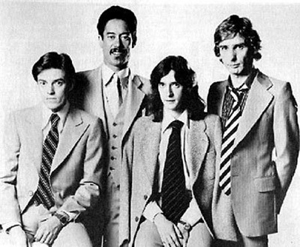 Be-Bop Deluxe was a British Progressive Rock/Glam Rock band active from 1973 to 1978. Led by singer/guitar god Bill Nelson, the band basically split up when he decided not to do it anymore.

Their sound can be described (for the most part) as dreamy, measured, precise and melodic while alternating between mellow and aggressive. David Bowie, Jimi Hendrix and Roxy Music are obvious influences, but the band has a sound all their own. Unlike many other prog-rock artists, Nelson and Be-Bop Deluxe were intrigued by Post-Punk and New Wave Music, and incorporated both styles in their music by the time of their final album.

After disbanding Be-Bop Deluxe, Bill Nelson went on to form the short lived Red Noise before embarking on a solo career. He also became a producer, co-producing the first album for A Flock of Seagulls and Warrior by Gary Numan.