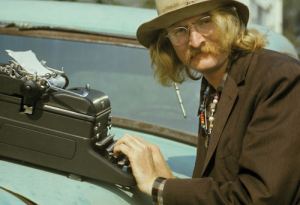 "But there is nothing like Richard Brautigan anywhere. Perhaps, when we are very old, people will write 'Brautigans' just as we now write novels. Let us hope so. For this man has invented a genre, a whole new shot, a thing needed, delightful, and right."
—Lew Welch, reviewing In Watermelon Sugar
"All of us have a place in history. Mine is clouds."
—Richard Brautigan
Advertisement:

He was influenced by The Beat Generation and embraced by hippies but did not seem to feel at home with either group. His closest hippie-like affiliations were with the Artists Liberation Front

, a down-to-earth bunch who sought a realistic path to a totally free economy. He wrote many broadsides for The Communication Company

note founded by hippie author Chester Anderson, including a well-known "valentine" about STDs

. (Richard regarded these groups as artists doing something productive, as opposed to hippies who he came to think of as do-nothing layabouts.)note It seems he did not always feel this way. In a 1967 interview — look for "The Way It Was: San Francisco Summer of 1967" on YouTube — he reflected that the hippies were attempting to emulate Native Americans and "return to the proper balance between man and nature; our society in the industrial age has completely thrown off the relationship, the balance with nature. And the hippies are interested in re-establishing this balance."

Urban Legend has it that once The '60s ended and the hippies got day-jobs, he was left without a significant audience, which may have contributed to his depression and subsequent suicide in 1984. The truth is that he made most of his fortune after the 60s note Trout Fishing In America, the book for which he is most remembered, was completed in 1962, long before the hippie movement, and wasn't published until the fall of 1967, after the Summer of Love was long over. , and hippies were only part of a much larger readership. His books were published in several dozen languages and continue to sell well in the U.S., Europe (especially France) and Japan to this day. None of his books, with the exception of a few early poetry chapbooks, have ever been out of print.

Despite (or because of) his issues with depression, his writing shows a light-hearted sense of humor, a vivid imagination and a love of language. Along with Kurt Vonnegut, he is credited

with having introduced Japanese readers to American-style humor, absurdity and social criticism voiced in vernacular prose, beginning in 1975 when their books were first translated. He is also believed to be the first American author to approximate the Japanese form called the "I-novel", especially in Sombrero Fallout.

As a child during World War II, he had subscribed to all the anti-Japanese bigotry and hatred typical of the era. As he grew older, he became interested in Zen, and learned what Japanese art and culture were really like. He describes this evolution of attitude in his books The Tokyo-Montana Express and June 30, June 30, written during his lengthy stays in Shinjuku.

His works tend to be difficult to describe. He uses a simplified, child-like diction (if it won't make your brain explode, try imagining the New-Age Retro Hippie version of Ernest Hemingway). His novels will invariably have some One Paragraph Chapters. His later works seem to veer into genre fiction, including detective fiction and horror, but in fact still have more in common with the rest of Brautigan's work than any straight genre piece. He was also a poet, which basically let him crank his imagination up to eleven. He revealed that he wrote poetry in order to learn how to properly write sentences so that he could write novels.

He occasionally engaged in other creative pursuits. Of note is Listening to Richard Brautigan, in which the author records sounds of daily life in his apartment and reads poems and stories, as well as Please Plant This Book

, a book of seed packets with brief poems printed on them (there is now an interactive flash version of this book online... no physical seeds though).

Go ahead and give Mr. Brautigan a try. You will smile.

and The Brautigan Pages

... remembering that one of Richard's best remembered poems

Works by Richard Brautigan with their own pages:

Other works by Richard Brautigan contain examples of: