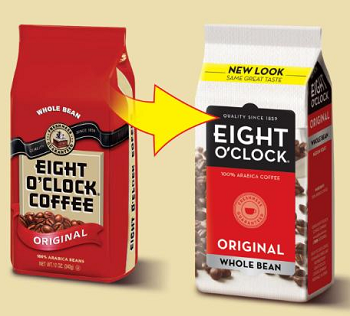 Not any better, but not any worse!
Advertisement:

A common Advertising Trope (and Stock Phrase) used when the packaging for something is redesigned. To reassure the consumer that, although the wrapper has changed, the underlying product is the same and there is no reason to be alarmed, the new version will proudly proclaim, "New Look, Same Great Taste!" or a close variant thereof, thus signaling to existing fans of the product that they have nothing to fear from the strictly-cosmetic changes. Sometimes, the phrase used will be simply "Same Great Taste!" since anyone already familiar with the product will immediately recognize anyway that the packaging has changed.

The changes might be purely cosmetic for the consumer, but there are practical purposes for the company. Afterall, the industry often has better things to do with their time and money than attempting a visual makeover on a product with no other practical purpose that may or may not actually grab consumer's attention. Examples include changing wrappers including the use of better materials that does not damage as easily during shipping, recycles better for a greener environment or a better physical design that has less empty-wasted space inside thus allowing more of the packages to be shipped on freight at a cheaper price than delivering the same number of products on multiple trucks.

(Of course, this also means that... the changes were strictly cosmetic, so guess what: if you were dissatisfied with the product before, you won't be any happier now.)

Compare and contrast New and Improved.