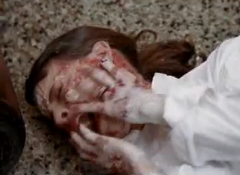 "...but really, I should have cleaned up the grease over there."
"I was scared of death before I saw that. Now I'm scared of life!"
— Russell Brand, on old British government PIFs
Advertisement:

Attentive readers may notice that the Nightmare Fuel examples that come from Public Service Announcements and Public Information films vastly outnumber those that come from normal commercials.

This is no accident — the idea is to drill into people's heads that one instant of carelessness/inattentiveness/failure to heed basic safety rules and regulations, one thoughtless comment or act of anger, one decision to smoke/drink/use drugs can (and often does) result in lifelong consequences, including severe injury or death and emotional scars that last a lifetime.

Talk about Well Intentioned Extremists - some people indeed believe that Scare 'Em Straight tactics — graphically showing the consequences — are the only way to shock the target audience into following safety rules and regulations at every moment. Or, in the case of abuse of others, be they animals, women, or children, to immediately report wrongdoing and ensure that the wrong-doers face justice stat.

The other side of the coin is that many of these are simply Brutal Honesty at its finest. When the predictable result happens, it frequently isn't pretty. However horrific these little morality tales may be, if they mean that someone doesn't get splattered across the pavement without the aid of CG, they have done their job.

The truly daring can watch one or more of these countdowns of some of the scariest PSAs and PIFs, which you can find in the folder below. Some of these countdowns have been compiled and uploaded by members of YouTube's community of PIF reviewers and connoisseurs. They know what they're talking about. Also, discretion is advised - there's some pretty nasty stuff in there.

Due to the vast quantity of ads that could qualify as Nightmare Fuel, the following topics have their own pages.

Animal Cruelty
Remember all those times as a kid you were told "owning a pet is a big responsibility"? Well, this is what they were talking about.
Bullying, Racism and Discrimination
Consider this a smarting reminder that picking on, or targeting anyone for mistreatment, is not harmless.
Child Abuse
Abusive Parents can be played many ways in fiction, but in Real Life? Not so much.
Domestic Violence and Personal Concerns
Domestic Abuse comes in many ways for many reasons, though the physical kind is easily the hardest to look at.
War and International Concerns
Let's take things to a higher scale. If you thought that War Is Hell for the soldiers, imagine how hard it must be to live in these war-torn lands.

Environment
If you're looking for a more intense Green Aesop, look no further. After all, we only have one Earth, and its ecosystem is a lot more fragile than we thought it was...
Wildlife
You thought domestic animals were the only victims of mankind's bastardry? Think again.

Other
It sure is a good thing there is at least one PSA that could probably cheer you up after all this.