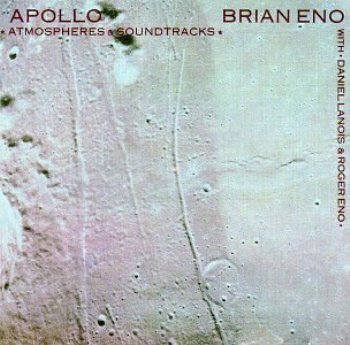 Apollo: Atmospheres and Soundtracks is a 1983 Ambient album by Brian Eno, best known for the singles "Silver Morning", "An Ending (Ascent)" and "Deep Blue Day". The album was originally intended for a documentary about the Apollo moon landings called For All Mankind, but was released five years earlier than the film. The reason for this was that the initial test screenings weren't very enthusiastic and thus the makers decided to delay the project and rethink things over. It was eventually released in 1989 and received an Academy Award nomination for Best Documentary. Despite all that the soundtrack has probably reached more people than the film.

The album notably makes heavy use of the Yamaha DX7, an FM synthesizer introduced the same year that would become a popular instrument throughout the remainder of the decade, arguably becoming the definitive 80's synth by 1991. While the DX7 was mainly used for its less-than-accurate presets— whose omnipresence in the 1980's music scene still define public perception of the instrument as well as '80s pop/rock music as a whole to this day— Eno manually programmed the synth himself to obtain the specific kinds of sounds he wanted out of it, later publicly releasing instructions for how to recreate the album's patches in a 1987 issue of Keyboard magazine. Given that the DX7 is notoriously difficult to program (hence why most musicians stuck to the presets), this is a pretty impressive feat. Eno would continue to use the DX7 on records he produced for bands such as U2 and Coldplay.