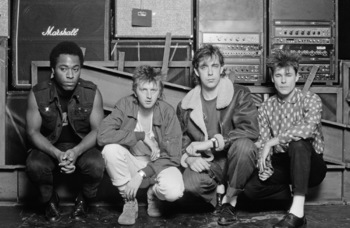 Founded by Bruce Watson and Stuart Adamson (formally of Skids) in 1981, Big Country are a Scottish Rock band most famous for their unique sound guitars often compared to Scottish bagpipes. The band's debut single "Harvest Home." reached the UK Top Ten in 1983 and was closely followed by the album "The Crossing" Featuring "In a Big Country", "Fields of Fire" and "Chance".

The band enjoyed moderate success until the 90s when poor album sales and an alcohol problem caused Adamson to commit suicide in 2001, the band would go on a 7-year hiatus and not record any new material until releasing "The Journey" in 2013 with The Alarm vocalist Mike Peters, their first studio recording since 1999.

In a big country you can find the following tropes: