Music / Let It Be 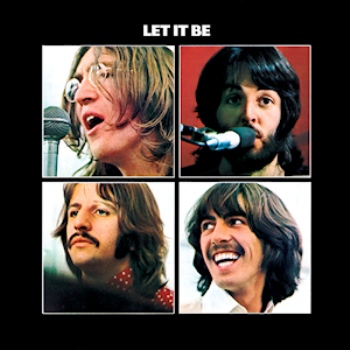 "I wake up to the sound of music..."
Advertisement:

Let It Be is the thirteenth and final studio album by The Beatles, released in 1970, almost a month after the group's break up. However, it was mostly recorded before Abbey Road, which got a release in 1969 and was the actual final album released during the band's lifetime.

It is also the only Beatles album not produced by George Martin, instead being produced by Phil Spector, who incorporated his trademark "Wall of Sound" production techniques by adding prominent orchestral embellishments throughout the album, as well as their only album to be partially recorded at Twickenham Film Studios rather than EMI (now Abbey Road) Studios. Most of the album, however, was recorded at the band's own Apple Studio, including three tracks ("Dig a Pony", "I've Got a Feeling", "One After 909") from a famous rooftop concert which marked the band's final live performance before an audience.note The band also performed "Get Back" and "Don't Let Me Down" at the rooftop concert; the Let It Be... Naked version of "Don't Let Me Down" is a splice of the two rooftop performances, while the version released as the B-side to "Get Back" was recorded in the studio two days earlier. "Get Back" itself, both on the album and in its single release, are an earlier studio performance, though Spector spliced in some applause and chatter from the end of the rooftop concert at the end of the album.

Paul McCartney hated what Spector did to their final album, having intended for it to be a "back-to-basics" Blues Rock approach for the Beatles rather than the Chamber Pop record Spector turned it into. John Lennon for his part felt completely different, crediting Spector for crafting something listenable out of what Lennon called "badly recorded" tracks. To this day it ranks as the most divisive Beatles album among fans, who argue as to whether it's an underrated masterpiece or an overblown mess emblematic of just how far the band had fallen on a personal level.

However, that difference in opinion did not stop the album from winning numerous awards such as the Academy Award for Best Music, Original Song Score and the Grammy for Best Original Score Written for a Motion Picture or a Television Special.

In 2003, a totally new version of the album was released, named Let It Be... Naked, where Paul's original vision could finally be heard. All the material on this album was devoid of Spector's production and showcased a simple rock sound in-line with the pre-Rubber Soul era, with its originally intended track listing in place. (Lennon's "Dig It" jam and the brief cover of "Maggie Mae" were both deleted and replaced with "Don't Let Me Down".) As a bonus CD, a Leave the Microphone Running recording from the Beatles in their studio was released too, which is more chatting and clowning about than actual recording.

The making of the album was documented in a film, also titled Let It Be, also released in 1970. The Beatles: Get Back, a three-part miniseries produced by Peter Jackson and comprised of six out of 57 hours worth of footage shot at Twickenham, was released on Disney+ in November 2021. The miniseries serves as a corrective to some longstanding myths about the sessions: contrary to her reputation, Yoko Ono does not influence the band's creative process at all, and despite Harrison's brief departure, the sessions weren't as acrimonious as they were reputed to have been, particularly once they moved from Twickenham to Apple Headquarters; the band are mostly cordial with one another, joking around and having fun playing covers of old rock tunes.

A five-disc reissue of the album also appeared in 2021; highlights include a new stereo remix of the album by Giles Martin (son of the Beatles' longtime producer George), which effectively splits the difference between Spector's mix and Let It Be... Naked, and a remaster of Glyn Johns' long-bootlegged original mix, which is much rawer than the official versions. There are also multiple discs of outtakes and jams.

"Tropes are flowing out like endless rain into a paper cup":

"I'd like to say thank you on behalf of the group and ourselves, and I hope we passed the audition."

Alternative Title(s): Let It Be Naked