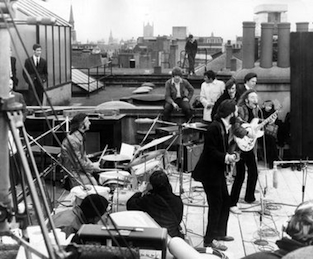 "I'd like to say thank you on behalf of the group and ourselves and I hope we passed the audition."
Advertisement:

A band holds a free performance live from a rooftop in an urban area, often with a large crowd forming on the streets below and police seeking to shut the performance down.

The Trope Codifier, of course, is The Beatles' final live performance together on the rooftop of their Apple Corps building in London, which came to an end when police asked them to turn the sound down. Often seen imitated for a Shout-Out or Homage.