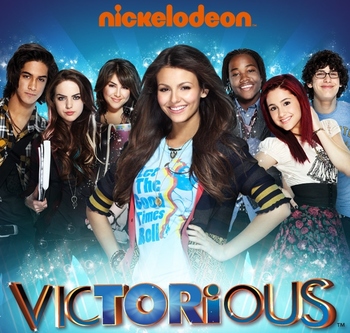 L - R: Beck, Jade, Trina, Tori, André, Cat, and Robbie.
You don't have to be afraid to put your dream in action
You're never gonna fade, you'll be the main attraction!
Not a fantasy, just remember me....
When it turns out right
'Cause you'll know that if you live in your imagination
Tomorrow, you'll be everybody's fascination!
In my victory, just remember me....
When I make it shiiiiiine!
— The opening theme "Make it Shine", sung by Victoria Justice
Advertisement:

Victorious is a teen musical sitcom created by Dan Schneider, which aired on Nickelodeon from 2010–13.

The star of the show is Tori Vega (Victoria Justice), who gets into Hollywood Arts (a school for the arts in Hollywood) after filling in for her less-talented sister Trina (Daniella Monet) during a big showcase. Backing her up throughout the experience is André Harris (Leon Thomas III), a musically gifted boy who almost immediately warms up to her. On the flip-side, there's Jade West (Elizabeth Gillies), a dark-natured girl acting as Tori's rival. Completing the cast are Caterina "Cat" Valentine (Ariana Grande), a hypersensitive girl on her own level of reality; Robbie Shapiro (Matt Bennett), an awkward and shy guy who is rarely seen without his puppet Rex Powers; and Beck Oliver (Avan Jogia), Jade's much more mellow significant other.

As should be no surprise, Hollywood Arts is... untraditional. Students are required to customize their lockers, live music in the hallways is more rule than exception, and nobody bats an eyelash at the eccentricities of their fellow schoolmates. Some of the show's plots are derived from the school, usually dealing with performances or assignments. Other plots come from character interaction outside school walls, providing plenty of fuel for Shipping. It must be noted that, for a Nickelodeon show, the show can venture quite far into innuendo – though considering Schneider's other show that was airing at the time, this is to be expected.

It is a major part of the Nick Verse due to a major crossover (and a subsequent spin-off) with iCarly.

The show's cancellation was suddenly confirmed in August 2012 while its third season was still airing. The cast and crew did not expect the show to be cancelled, and thus only filmed three seasons; the third season was then split in half by Nickelodeon to make a fourth, with the final episode airing on February 2, 2013. As an appropriate finale episode was not written, the show was left with No Ending.

Cat Valentine returned on the same year for the spin-off Sam & Cat, this time alongside Sam Puckett from iCarly as her co-protagonist.

open/close all folders
A-C
/ 'Fore I punch you in the lips / Stop your staring at my- HEY!". They were probably gonna say "tits" to make the rhyme work.
D-G
H-L
M-P
R-T
U-Z
Feedback

After two and a half seasons full of potential ship-teasing, it seems like Tori and Beck are about to kiss each other. Unfortunately, Tori's mom ruins the moment.

After two and a half seasons full of potential ship-teasing, it seems like Tori and Beck are about to kiss each other. Unfortunately, Tori's mom ruins the moment.